Accueil » Travel and Expatriation in Europe

Are you going on a road trip to Eastern Europe via Romania, Hungary, the Czech Republic and Germany? Are you an expatriate in Luxembourg or are you going to Spain for your retirement? Be aware that in Europe, medical expenses are quickly very expensive in private medical centres, and the ceilings on social security reimbursements are never related to this type of expenditure. So, whether it’s for a few days or for a long period of time, and to protect yourself in case of an accident, hospitalization or repatriation, it’s important to remember to take out international health insurance before you go abroad.

ETIAS Europe: the European version of the American ESTA

ETIAS is the acronym for European Travel Information and Authorization System. The European Union created this visa waiver program to protect and strengthen its borders. Its main objective is to identify possible threats or risks associated with visitors traveling to any of the Schengen countries.

When to go to Europe?

Here is a table listing the seasons in each European country:

Red does not mean that you should not travel to the country, for example in Norway, you may have the chance to see the famous Northern Lights between October and March. In addition, some European cities can be enjoyed in winter as well as in summer. 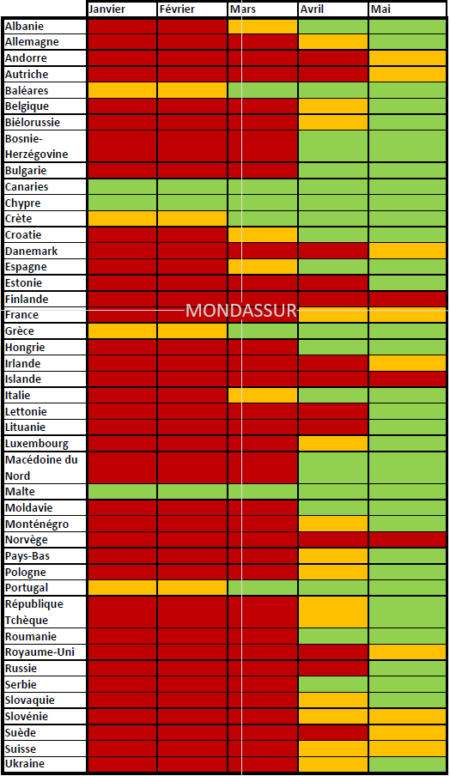 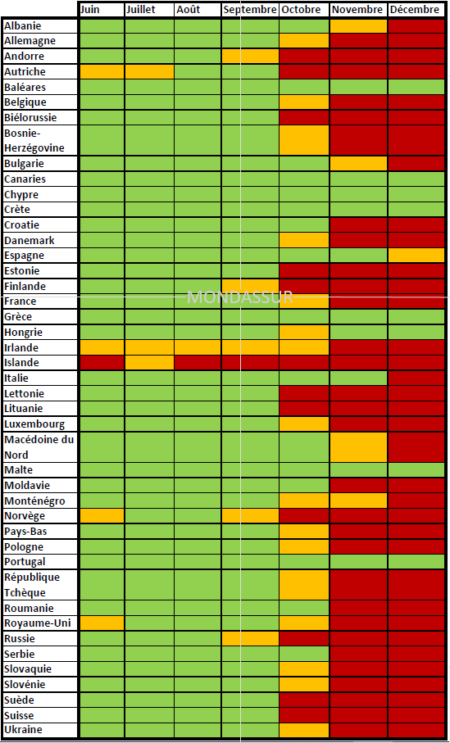 Here is a list of 20 places to visit on your trip to Europe:

What vaccinations should I have before I travel to Europe?

Before leaving for Europe, make sure your vaccination record is up to date:

What are the best routes to Europe?

Here’s a map of several itineraries to discover Europe that you can use as inspiration to create your own (details below the map):

Black route: this is a good starting point to discover Europe. You will arrive in Lisbon, then stop in Madrid on the way to Barcelona. Barcelona is a must-see, the city is steeped in culture, monuments and history. You will cross the border and discover the famous Dune du Pilat. Before finding yourself at the foot of the most visited monument in France, you will visit the second most visited monument in France: the Mont Saint Michel. This monument is, in our opinion, a must-see during your stay in France. Finally, you can spend a few days in Paris, to discover the French capital, its historical monuments, known internationally.
From Paris, you can choose between several itineraries to discover Europe.
Red itinerary: from Paris, you will reach a small town in France, full of colour, with an architecture that is not forgotten, Colmar has even inspired Japanese directors. From Colmar, you can reach Lake Geneva and visit the capital of Switzerland at the same time. Afterwards, you will cross the Italian border and reach Venice, the Serenissima, with its 438 bridges. You will then descend into southern Italy to Rome, a mythical European city not to be missed.
Green Route: The Green Route connects many of Europe’s not-to-be-missed capitals during your stay in Europe, passing through the United Kingdom, heading into Eastern Europe and ending at the gateway to the Middle East in Turkey.
Blue route: from Berlin, you will travel up through Hamburg towards Copenhagen. Between Stockholm and Oslo, you will discover a culture and way of life very different from the heart of Europe. Finally, you will fly to Iceland, with its impressive landscapes, geysers and northern lights.

Can you drink tap water in Europe?

In all of Western Europe, you can drink tap water without any problems. In Southern and Eastern Europe, this is less certain. It is best to drink bottled water with a cork.

What are the worst diseases in Europe?

Climate change, such as different temperatures and rainfall, is the cause of many infectious diseases in Europe. However, 30% of these diseases are transmitted by mosquitoes. Even if cases are extremely rare, it is possible to catch the following diseases:

Which are the most dangerous cities in Europe where crime is highest?

Here is a list of the most dangerous European cities with high homicide rates.

On the other hand, some cities have a high crime and danger rate that can be distorted. Crime and danger are concentrated almost exclusively in certain areas, while other areas of these cities are very touristy and quite safe. Or the political situation, civil wars or just consequent demonstrations in some cities distort the data. It is important that you research certain cities thoroughly before you go.

Here is a list of European low cost airlines in Europe:

What means of transport can I use to travel in Europe?

Here is a map showing the time difference depending on your location in Europe. Iceland’s actual position is much further west than the UK in longitude. 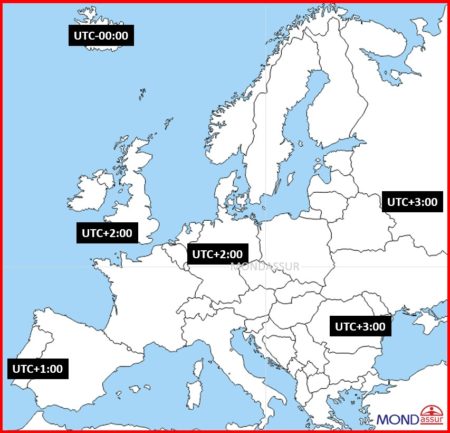 What are the best student cities in Europe?

The most popular cities for international students according to our experts are:
1. London
2. Paris
3. Lisbon
4. Berlin
5. Barcelona

What are the favourite cities of expatriates in Europe?

The favourite cities for expatriates in Europe are :

Patricia Fontanals
Verified
Mondassur delivers excellent client service. Our insurance agent is always available and quick to answer all our questions. Thank you!!

Bwana Pato
Verified
I am super pleased with the efficiency and ease of getting started.

robin marlowe
Verified
I haven't yet used--and hope not to!--the health insurance policy I just purchased from Mondassur for my extended stay in France, but all so far has gone well, including email support in clarifying the different policies, and the online purchase itself.Their prices for the visa-required insurance is far more reasonable than any of the other agencies I found online.I'll reserve the fifth star in case I need to use the policy, but all indications are that the process will be easy and any interactions courteous and efficient.