Accueil » Travel and Expatriation in America

Would you move to the United States to join your family or work? Planning your road trip to the Grand Canyon? Or maybe you’re going to Canada on Working Holiday?
Be aware that in North America, the cost of medical care is excessively high, even more so in the event of hospitalization or repatriation.
So, whether it’s for a few days or for an extended stay or even an expatriation, and to protect yourself in case of accident, hospitalization or repatriation, it is important to think carefully about taking out expatriate or travel insurance before you go abroad.

Your insurance in America by country

Find out more about the country you’re interested in:

When to go to America?

America is made up of very large countries with several time zones and different climates depending on the region.
For example, in the United States, during the months of June, July and August, the climate is ideal for most of the country. There are some regions where the climate is favourable all year round, such as Louisiana with winter temperatures around 15°.
The warmest temperatures in Canada occur during the months of June, July and August throughout the country.
It is advisable to visit Mexico during the months of October to April, corresponding to the country’s dry season.
The best time to visit South America is in the spring, specifically in April. Temperatures are mild throughout the continent despite the presence of rain in some geographical areas such as northern Brazil.

The top 10 places to visit in America

North America is one of the most expatriate-centred regions in the world. It has hundreds of cultural and natural places that are not to be missed. Here is a selection of 10 places to visit in North America:

There are many popular destinations for expatriates in South America. Most expatriates move there because of the paradise-like living environment that some cities offer. Although there are hundreds of things to see and do, we have put together a selection of 10 places to visit while in South America. The places we have chosen are in the countries where the largest expat communities are concentrated.

What vaccinations should I get before going to America?

Before leaving for America, it is imperative that your universal vaccination booklet is up to date (polio, tetanus, BCG, diphtheria, MMR and whooping cough).
If you wish to settle or stay mainly in South America, it is compulsory that you are vaccinated against yellow fever for the following countries (including stopovers):

What are the best routes to discover America?

North America is home to so much to see that even dozens of road trips wouldn’t cover everything you need to see. Here are some itineraries for visiting North America:
It is advisable to take a good month minimum to visit a good part of the western United States. The distances you will travel if you prefer road to air will be very great. Allow more time than your app estimates, e.g. for a 1.5 hour drive, allow up to 2.5 hours. Driving in the US is different from Europe and Americans drive more slowly. If you are planning to visit several large cities on the East Coast, it is recommended that you allow extra time for your travels.

To discover South America, we suggest a long-distance road-trip itinerary that starts in Patagonia and ends in Brazil. The itinerary is feasible at any time of the year, but the months indicated are the most optimal if you are looking for the best weather by country. In addition, you can customise the itinerary to your liking depending on what you are looking for and what you don’t want to miss. You can also check out our section on 10 places not to miss in South America.
Finally, Colombia did not fit into our recommended itinerary as the best time to visit is in December/January. However, this country is worth visiting as much as the others.

Average cost of living in major cities in America?

The cost of a monthly transport pass in the major cities of South America:

The average cost of a mid-range restaurant per person is:

The cost of living in South America is much lower than in North America, so this is an important factor to consider if you are planning a road trip in America.

Can you drink tap water in America?

In North America, specifically the USA and Canada, you can drink tap water without worrying. In some rural areas it is advisable to take precautions to avoid any risk. In Mexico, it will be less obvious to drink tap water without asking the question “is it safe to drink? It is best to drink bottled water with a cap.
In Central and South America, it is recommended that you drink bottled water purchased in supermarkets. Even if the water is safe to drink in some parts of some countries, it is better not to take any risks and only drink bottled water with a cap. This is especially true if you are just passing through on a road trip or holiday in South America. The water in some areas can expose you to worrying food poisoning.

Many diseases are transmitted by mosquito bites in South America. It is strongly recommended that you are vigilant and apply strict preventive measures such as

It is important to differentiate between cities that are totally inadvisable for tourists due to the risk of being a victim of aggression in the whole city and cities where crime is concentrated in certain areas.
For example, the current economic, political and social situation in Caracas, combined with the poverty of its inhabitants, makes this city the most dangerous in the world. The homicide rate is one of the highest, if not the highest, in the world. Some of the police are corrupt and the rates of assault and theft are extremely high. Wars between cartels and with the police can break out in any part of the city. The rate of kidnapping is highest in upmarket areas.
In contrast, some cities have extremely high crime and danger rates. However, crime and danger are concentrated almost exclusively in certain areas, while other parts of these cities are very touristy and quite safe. It is important that you research some cities thoroughly before you go.

It is important to identify the main South American airlines so that you can benefit from the best prices if you travel across the continent.

What are the main means of transport for travelling in America?

The preferred means of transport in South America is by bus. Indeed, by bus, you can travel to any country, but also across the whole continent. The cost is very low but the journeys are extremely long. In addition, there are many bus companies, some of which are unreliable, so it is important to find out which company to use before you leave. On a different budget, you can also travel by plane with local and low cost airlines.

UTC or Universal Time Coordinated, is the time in Reykjavik, Iceland UTC 0 all year round.
For example, in France it will be UTC + 2, in London UTC +1. 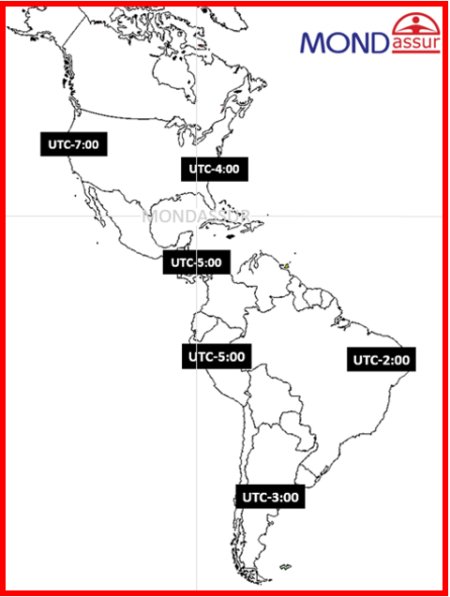 What are the best student cities in America?

The best student cities in North America are :

These North American cities are home to some of the best universities in the world and attract students from all over the world every year.

The best student cities in South America are:

Santiago and Sao Paulo are home to the best universities in South America. Most of the capitals welcome many students each year.

What are the best cities for expats?

The main cities where expatriates move to work in North America are :

The main cities where expatriates settle in South America are :